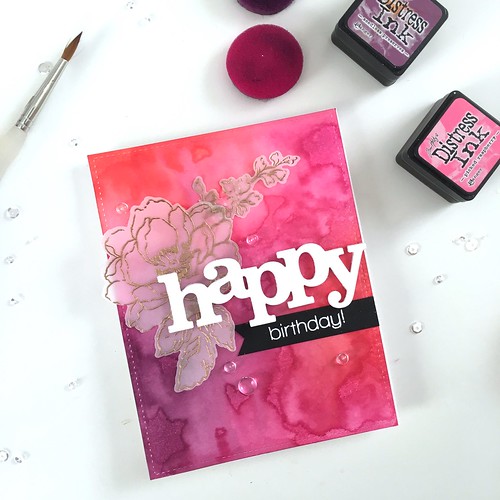 This one might be a new favorite! I tried a new-to-me technique with distress ink blending for the background on this card and I love the effect. 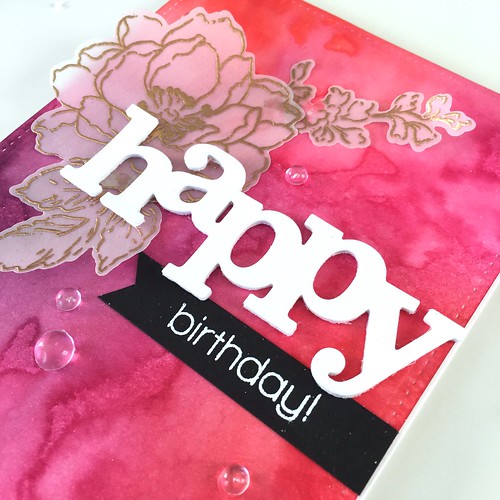 I started by blending a mix of Seedless Preserves, Picked Raspberry, Festive Berries and Abandoned Coral distress inks onto a piece of Tim Holtz distress watercolor paper. I then created the mottled/washed-out effect (I just made that term up) onto the panel by adding puddles of water here and there and letting the water dry on its own instead of picking up the color with a paper towel right after, as I normally do. It’s not a novel concept by any means, but it was the first time I’d tried it out and I love the softer, more diffused effect it gives. I was turned onto the technique after reading a post over on the Wplus9 blog (watch the video, too!). 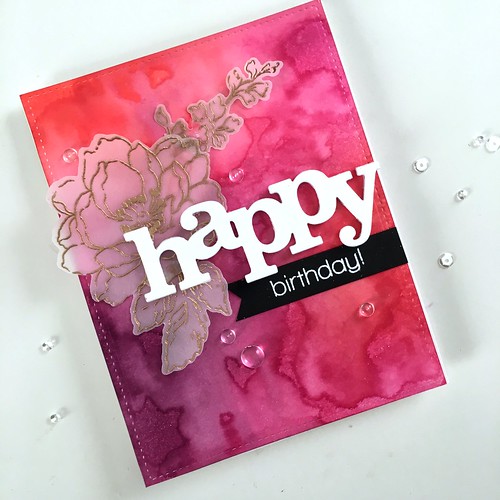 While the panel dried, I stamped (with Versamark ink) and heat embossed a flower and some foliage from the Altenew Beautiful Day stamp set onto a piece of vellum. I used the coordinating dies to cut out the images and then arranged them on the dried watercolor panel. Did I mention I used a stitched frame die to add some detail to the  panel? I did that, too, before I adhered the floral images with some strategically-placed glue dots. 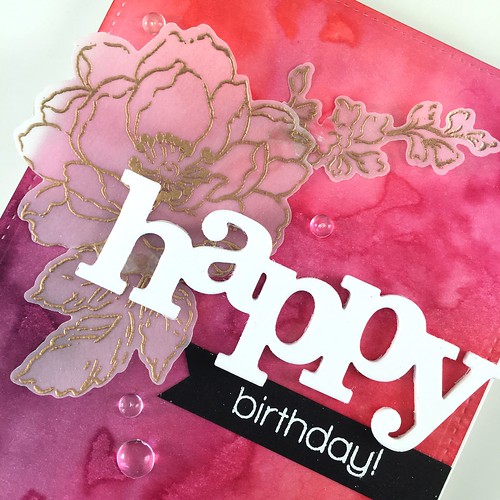 I also die cut the word Happy with the Winnie & Walter Happy die from some white cardstock and fun foam. I heat embossed the birthday part of the sentiment in white onto a piece of black cardstock. I adhered the panel to an A2-sized white card base and finished everything off with – you guessed it – some Pretty Pink Posh clear droplets! 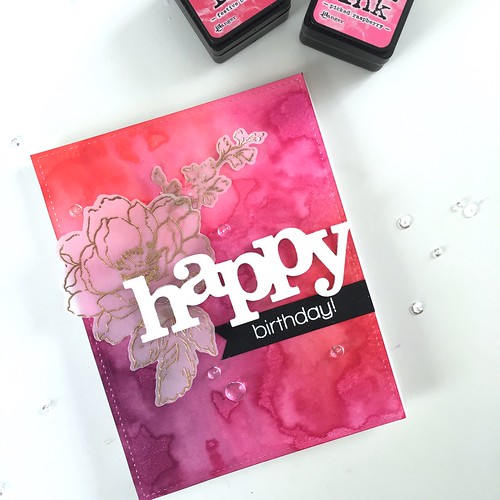 I took quite a few photos of this card…I think because I like it so much. I hope you like it, too! 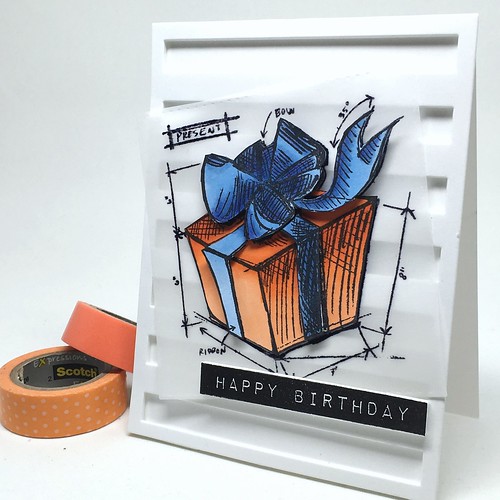 Making cards that are suitable for a male recipient can be difficult sometimes. When I need to make a card for a guy, I usually go straight for a Tim Holtz blueprint sketch stamp. The sketchy, architectural feel to them makes them perfect for masculine cards. For this card, I stamped the present image on some white cardstock, colored the box and the bow with copics and cut them out. I then stamped the image again on some vellum and adhered the colored-in box and bow on top of the vellum. I popped the colored image up with a bit of foam tape to give the card some added dimension. 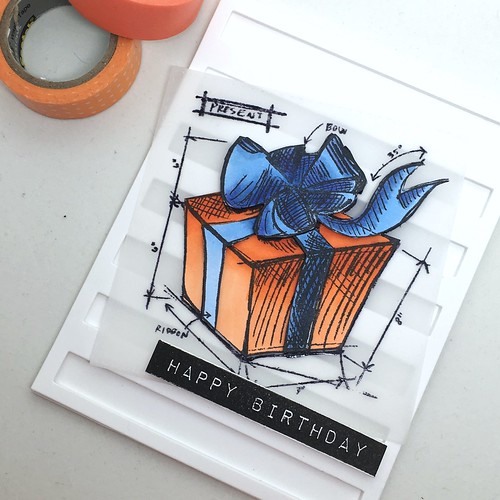 I recently purchased a Papertrey Ink horizontal stripes cover plate die and I can’t get enough of it. I think 9 of the last 10 cards I’ve made have included some horizontal background stripes, and I see no signs of stopping. I love how it adds a little extra somthin’ somethin’, so I used the negative cut from the die and popped that up onto my card base before I added my vellum panel and sentiment. The sentiment is from the Altenew Label Love stamp set. 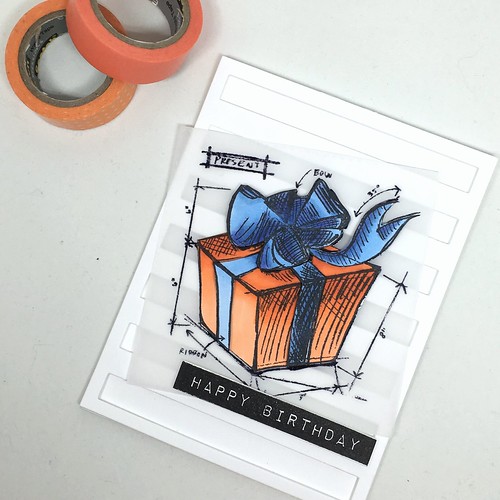 Quick and easy, and totally manly. :)

Hello! I am just back from a nice, relaxing vacation in the White Mountains of New Hampshire, which is why I haven’t posted in a little bit. Hopefully I’ll be back into the swing of things in the next few days (I still haven’t unpacked everything yet…). 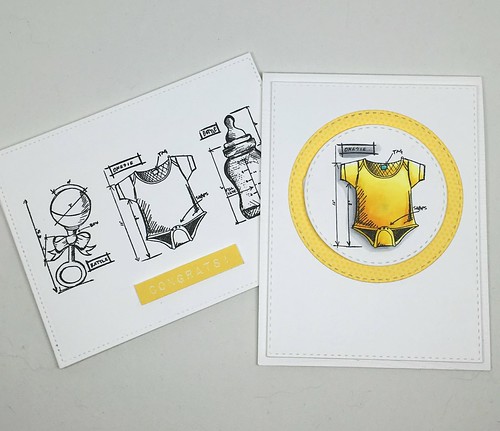 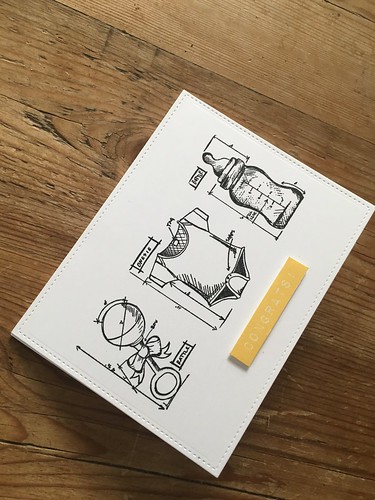 The first card I created by lining up three stamps from the set. in my Mini Misti tool and stamping them out in a straight line across the 4.25″x5.5″ panel (that I added some interest to with a Lawn Fawn stitched rectangle die). I used Versafine black ink for the stamping. For the sentiment (which says Congrats and is not showing up well in the photos…), I stamped a sentiment from the Altenew Label Love stamp set in Buttercup pigment ink. It’s such a great yellow color. 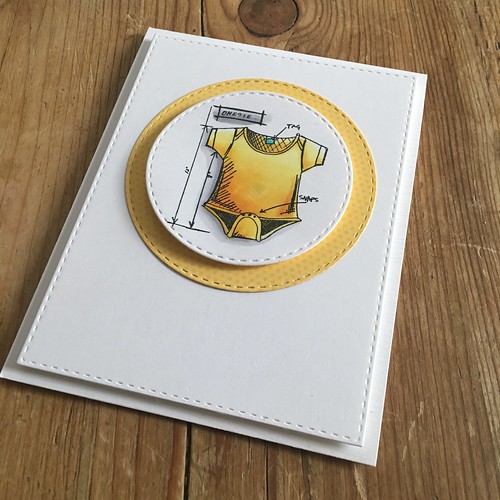 For the second card, cut the back panel with another stitched rectangle die, and then cut two stitched circles, the larger one in yellow, the other, using a SSS stitched circle die.  I stamped the onesie image (so cute) onto the white stitched circle shape and colored it with my copic markers. I popped several layers of the card up with some foam tape to give the card a bit of dimension. 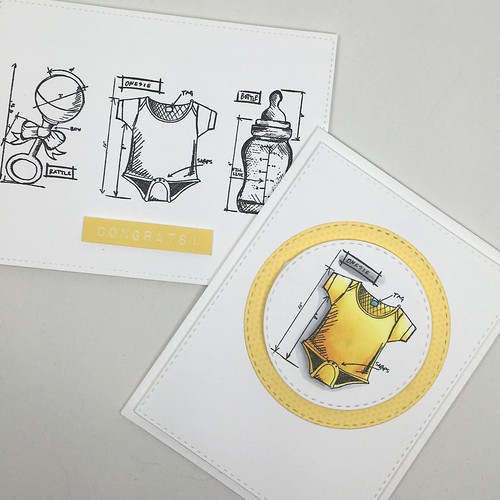 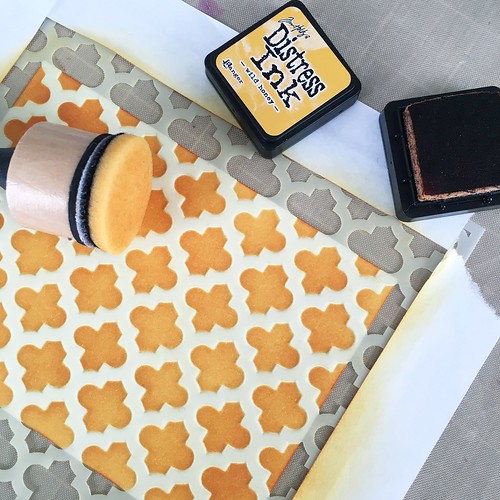 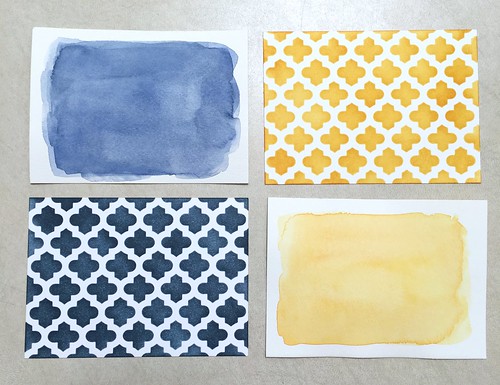 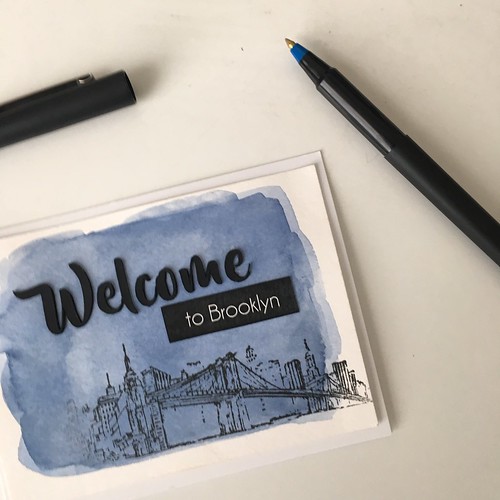 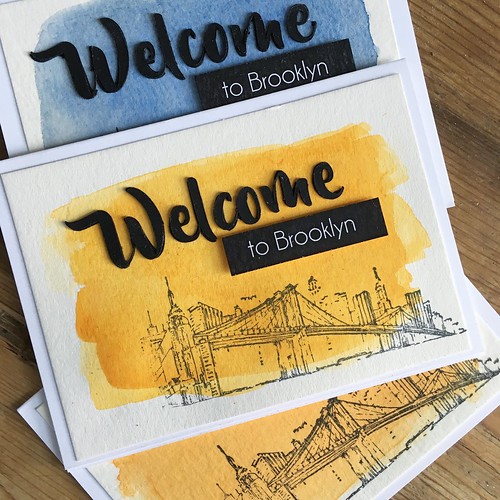 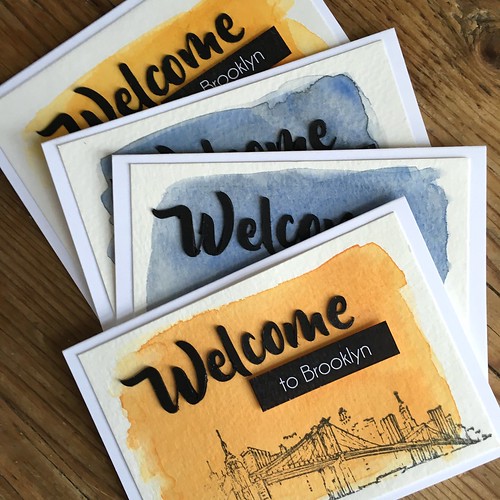 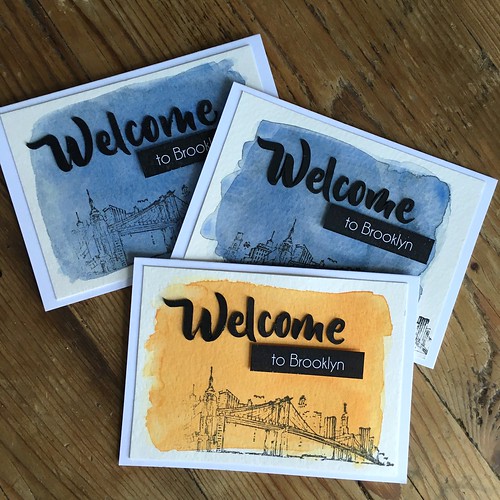 Popping in today to share some recent projects. I’ve been loving the Tim Holtz Birthday Blueprints set because it’s so easy to create quick cards with. 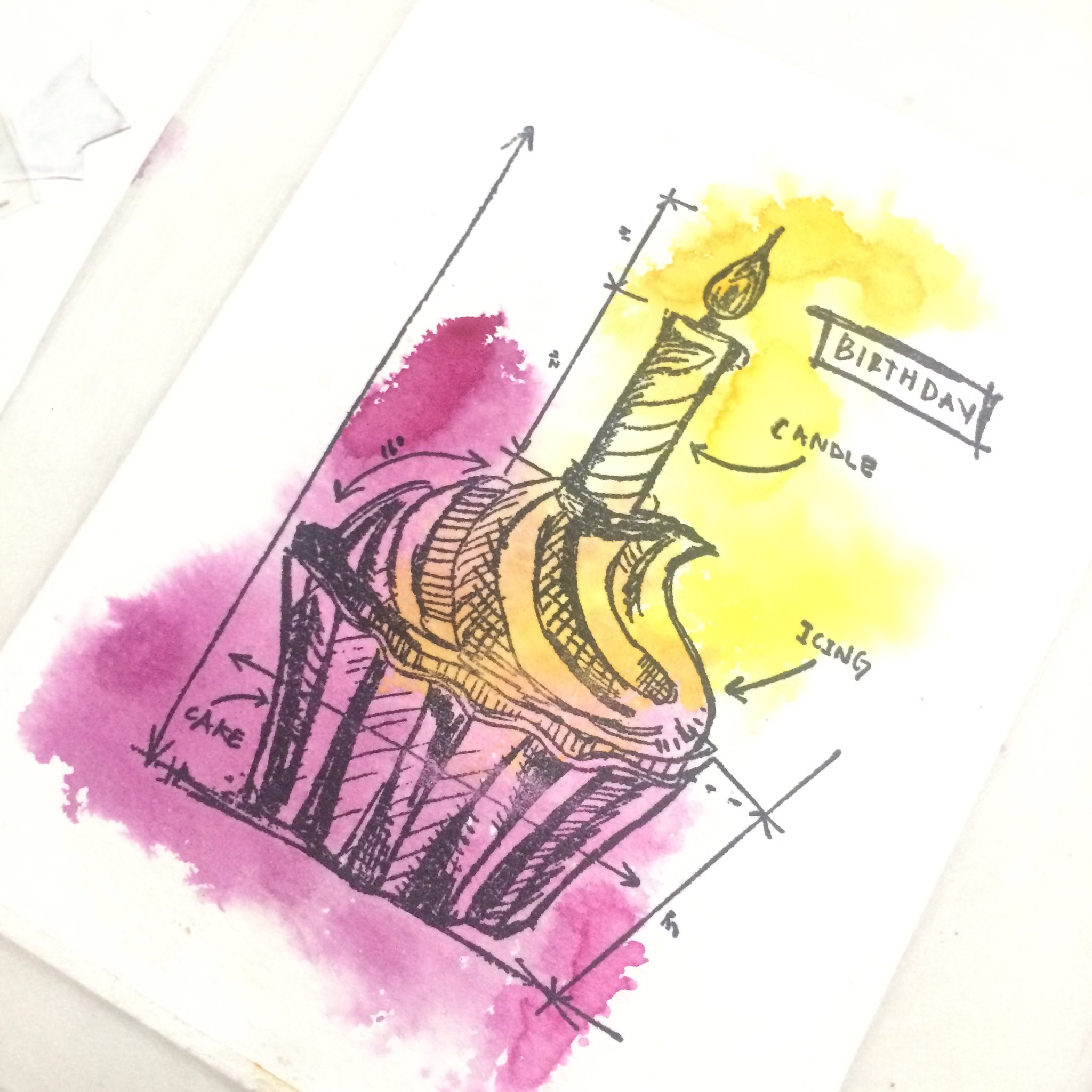 Sometimes I just stamp an image from the set in archival ink, and then do a crazy watercolor wash over the top. Mount it to a card base and I’m finished. I love the structural blueprint quality of the stamp and how it contrasts with the haphazard watercolor effect. 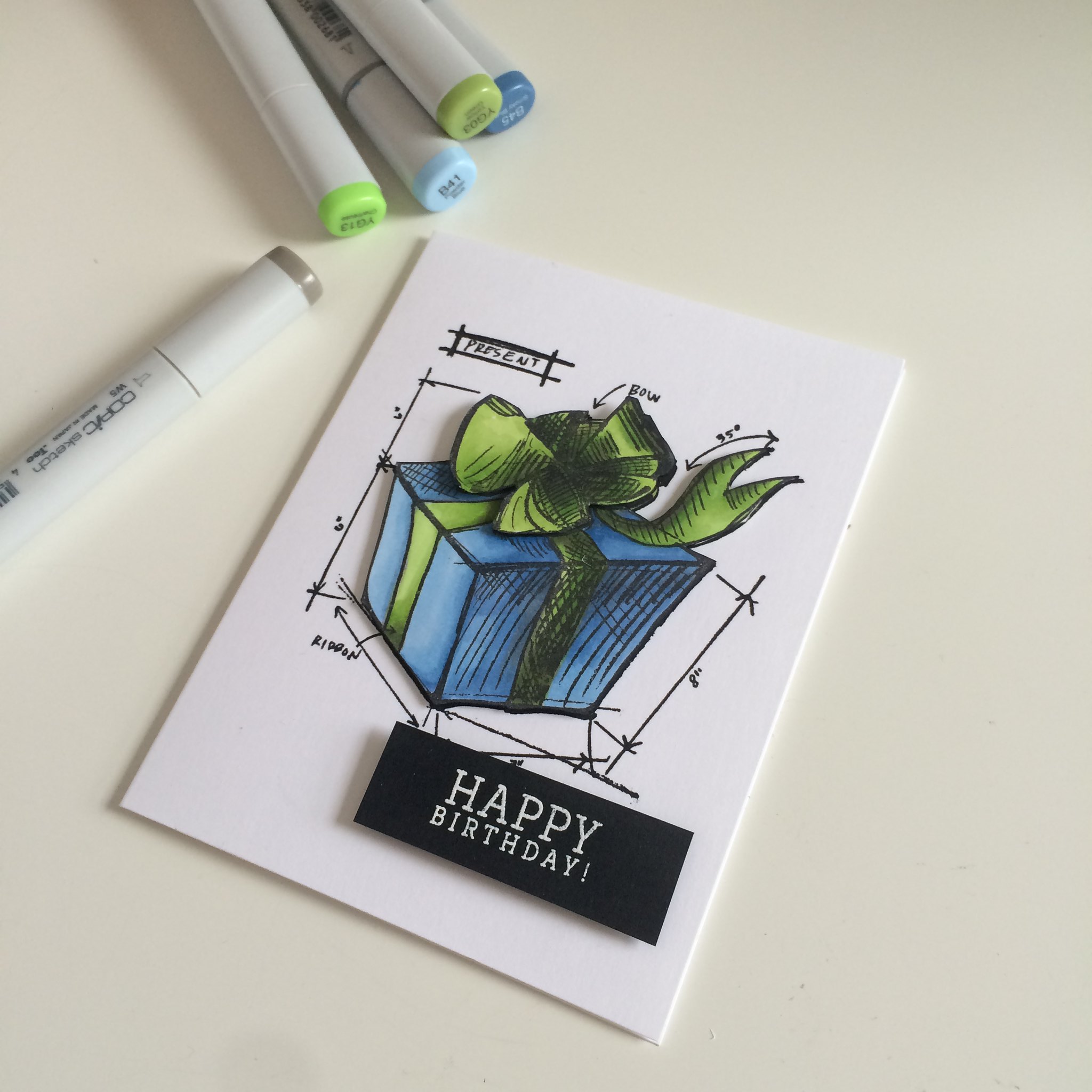 My other favorite way to use this set is with my copic markers. I’ll stamp the image in black on a card base, then stamp it a few times on some scrap paper. I color elements of the images I stamp on the scrap paper and then cut parts out and pop them up on top of the image on the panel. I’m not sure if that makes sense, but it gives the card some nice dimension that you can’t really see in these photographs. 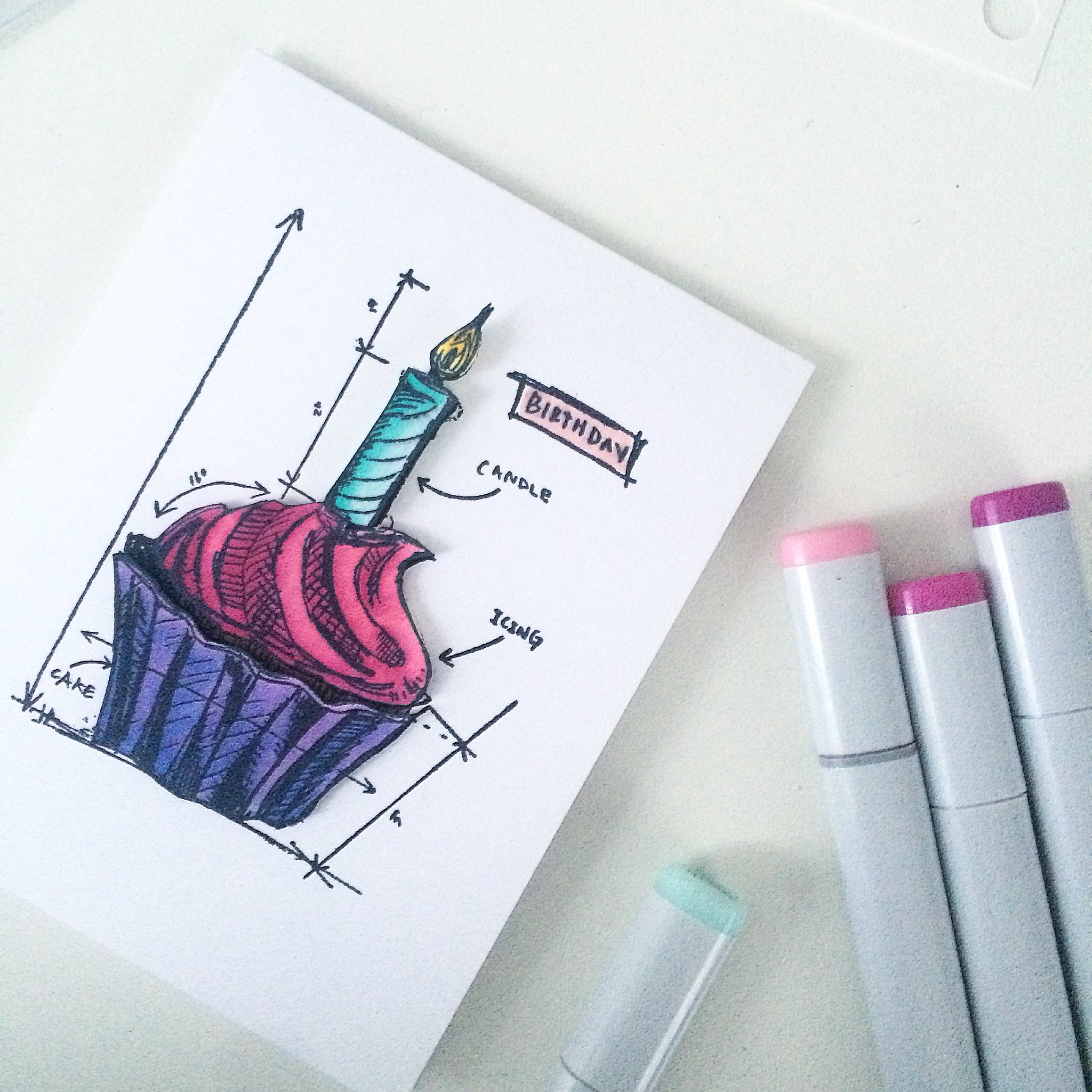 There are several fun blueprint stamp sets by Tim Holtz. I’m having so much fun with the birthday set that I might have to add some others to my stash. What’s your favorite Tim Holtz stamp set?