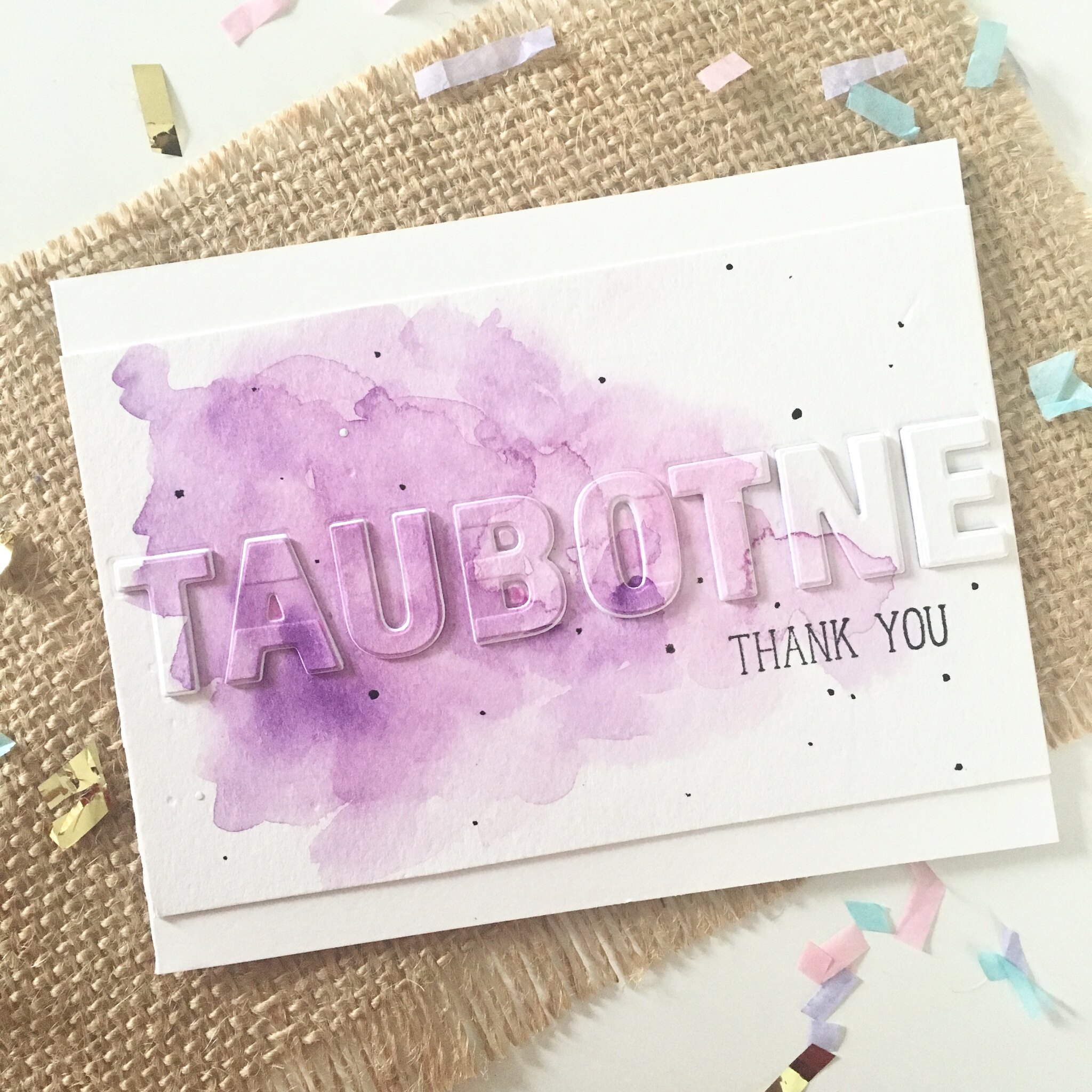 Taubotne means Thanks or Thank You (informal version) in the language of the Nipmuc people. It is one of only a few words that I know in the language. It is one of only a few words that many people know in the language, because it is a language was once considered extinct – no one has spoken it fluently for many, many years. The Nipmuc Language reclamation project will change that. Now, the tribe is holding classes and workshops to revive the language of this place I call home. Though I’m not currently involved in this work, I find it to be equal parts fascinating and complex. 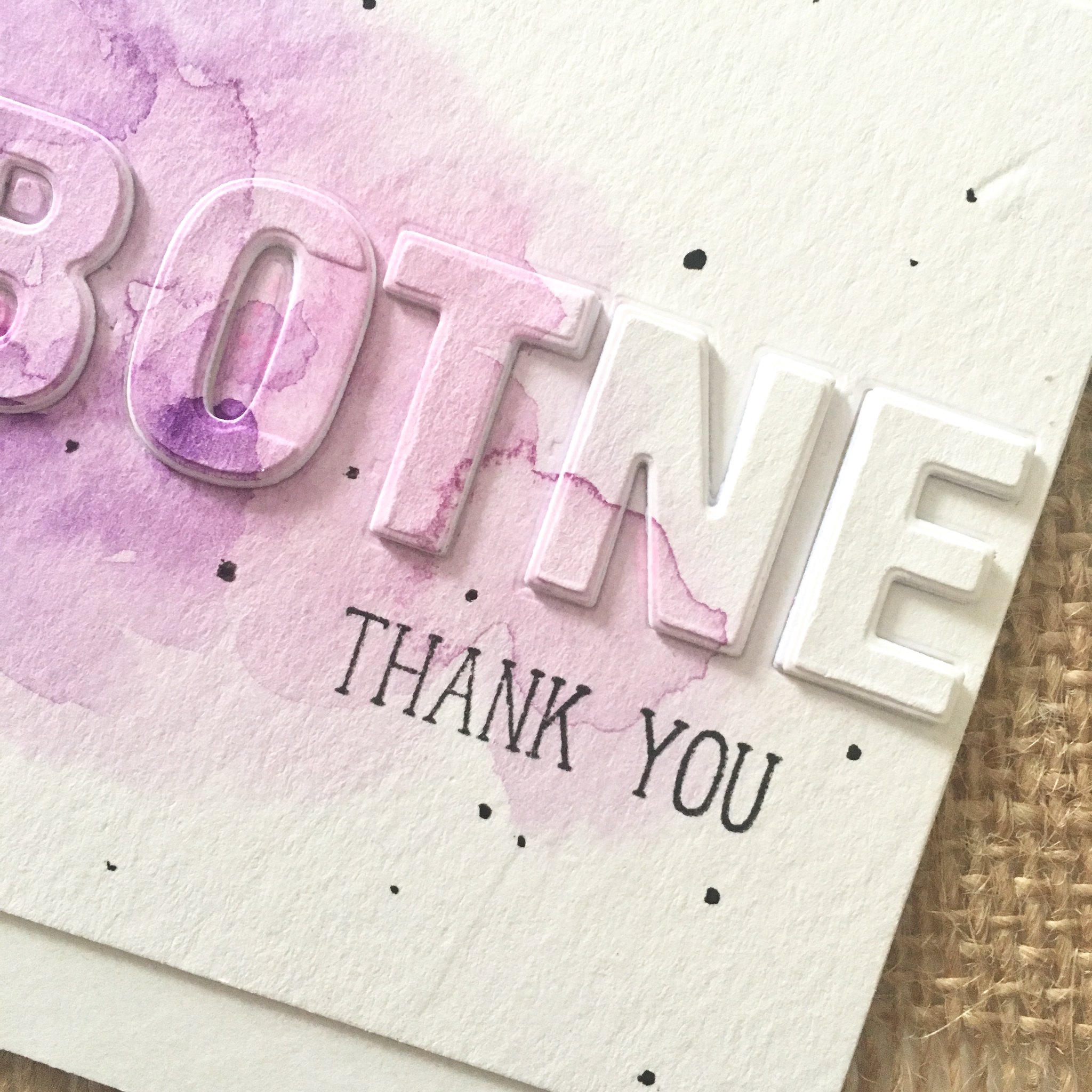 I’m not going to give a history lesson here, or dive too deeply into my feelings about the loss of an ancestral language, but I will give a shameless plug: I created an online exhibition a little over a year ago, titled “From English to Algonquian: Early New England Translations.” The exhibition explores several 17th century Algonquian-language texts (the Nipmuc people spoke a dialect of the Algonquian language) and how those texts are being used to revive native languages. In addition to the work happening in Nipmuc Country, this reclamation work is happening now among many other New England tribes, including the Wampanoag and Mohegan. Please check out the exhibition or other pages linked if you’re interested in knowing more. 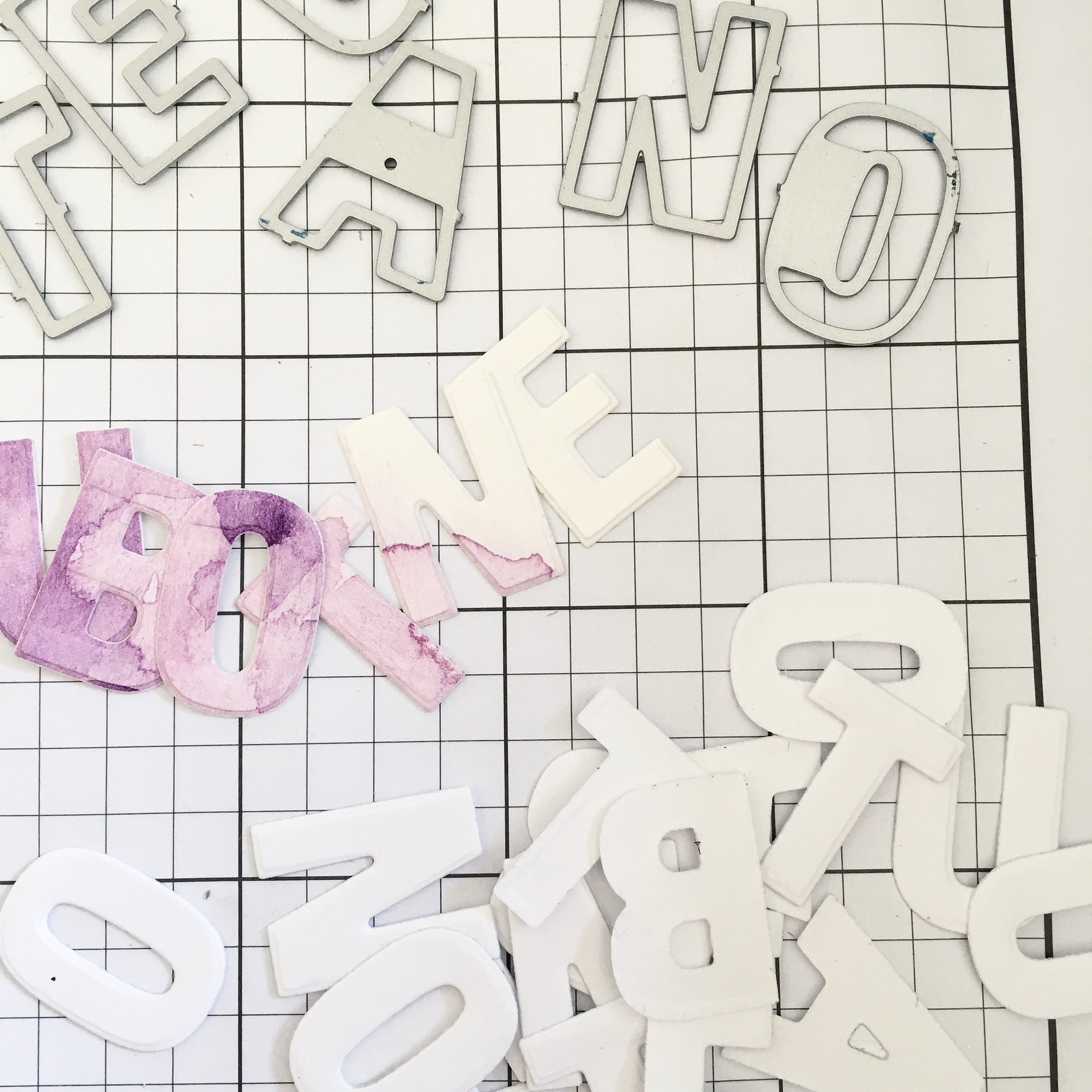 As for this card, I kept it pretty simple. First I did a simple watercolor wash and then used letter dies for the sentiment, cutting them from the panel and popping them up across the front of the card. I then stamped a simple thank you as a sub-sentiment to provide the English translation of taubotne. 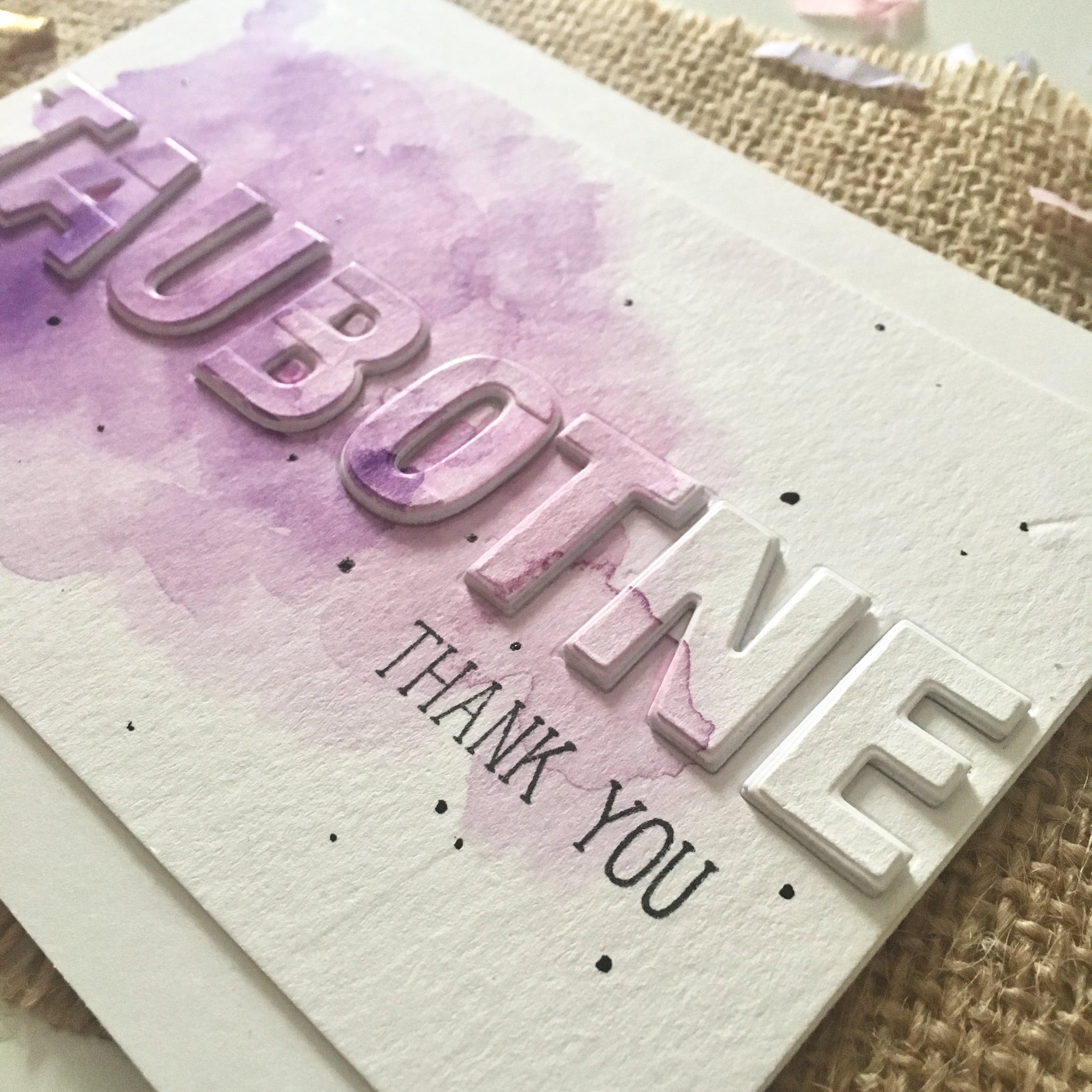 I can’t wait to make more of these, using other words, very soon! 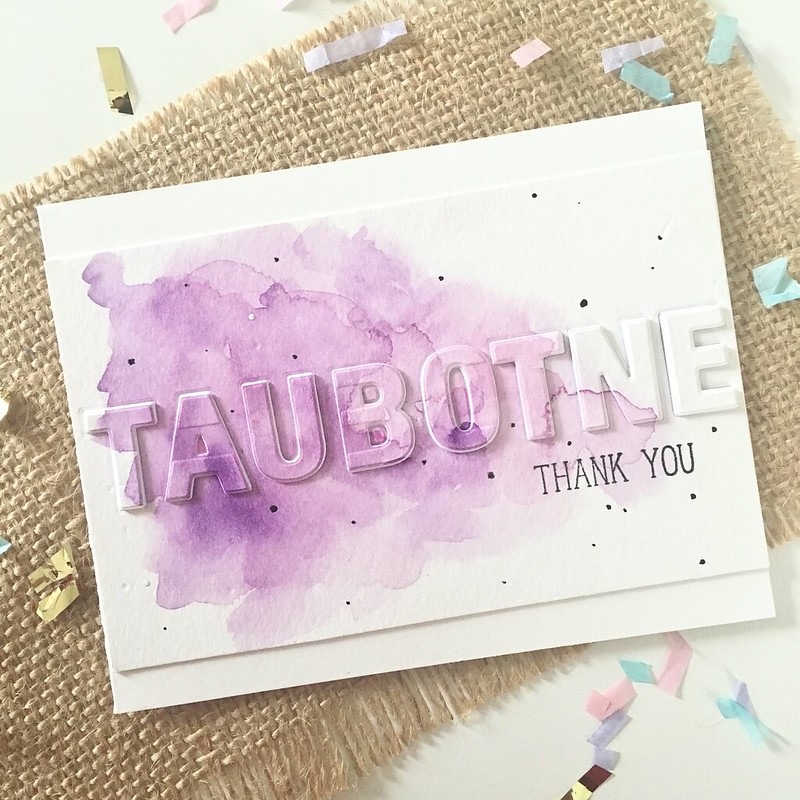 With the crazy weather we’ve been having here in New England (in the 70s three days ago and today we are barely in the 30s), it feels like the Fall has been pretty fleeting. Not much color on the trees, and some trees didn’t have much of a chance to put on a show before all the rain we’ve been having wiped out all of their leaves too soon! But, some of the Fall themed cards I’ve been making have at least helped me get into the spirit of Autumn, my favorite season. 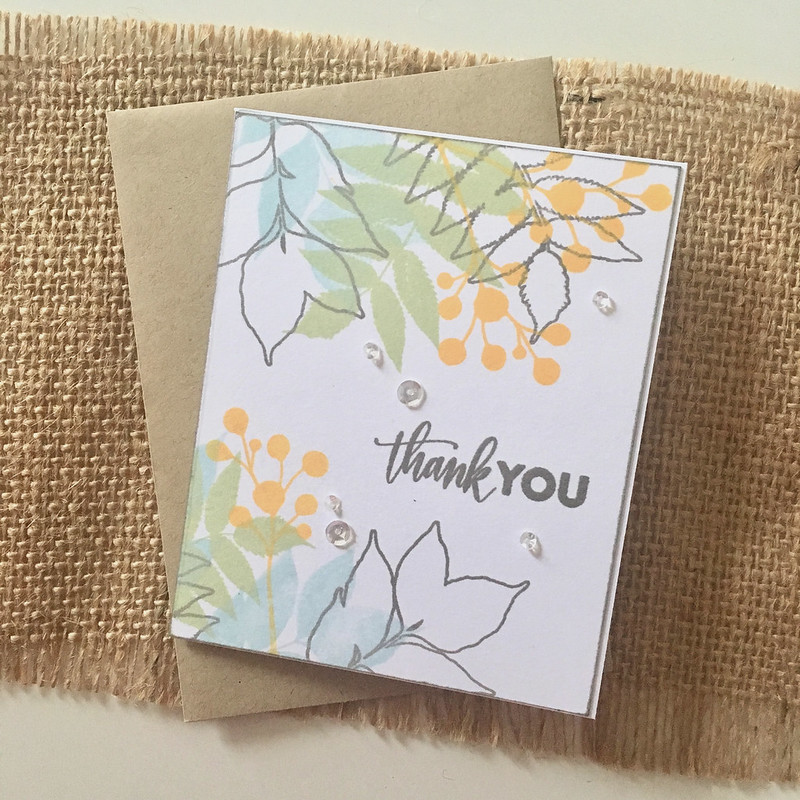 This little card is inspired by the first card (by Dawn of Wplus9) in this post, and  these cards made by Kara over at K and R Designs. I loved how both ladies mixed outline stamps with solid images, and I also loved their choice of color scheme, so I played around with that a bit myself. I used similar ink colors and images from both the Wplus9 Autumn Leaves stamp set and the Botanical Bunch stamp set. 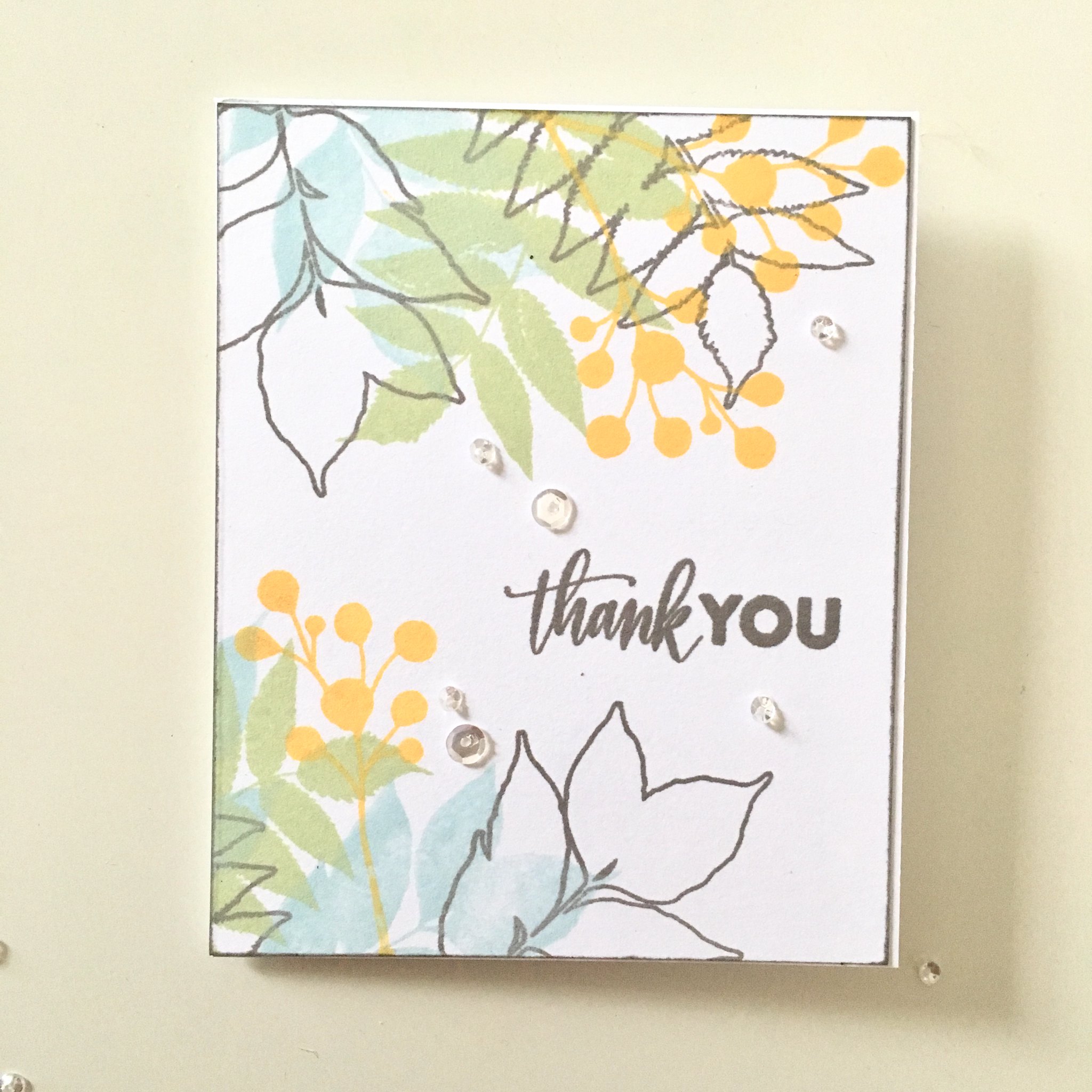 I should also mention that I was inspired to purchase this stamp set because of the amazing things Natalia Valkovskaya creates with it! You can find a post of some beautiful cards she made here, but she also has a great instagram page. 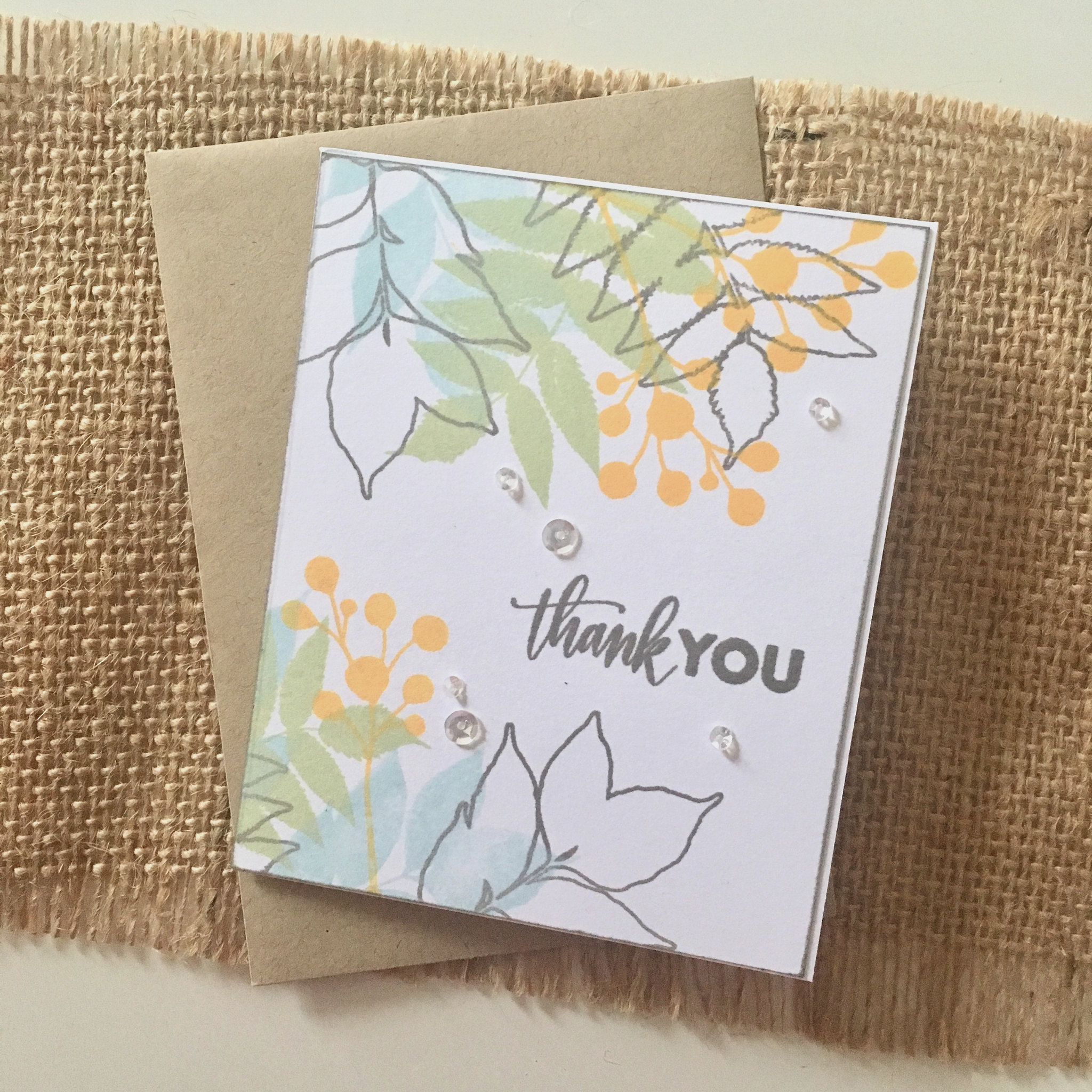 The sentiment comes from the Brush Stroke Messages stamp set, and I added some detail around the edge of the panel by running the edges through my ink pad (which I believe was Lava Rock). Then, a few sequins to finish it off after mounting it to a smaller-than-4bar card base. 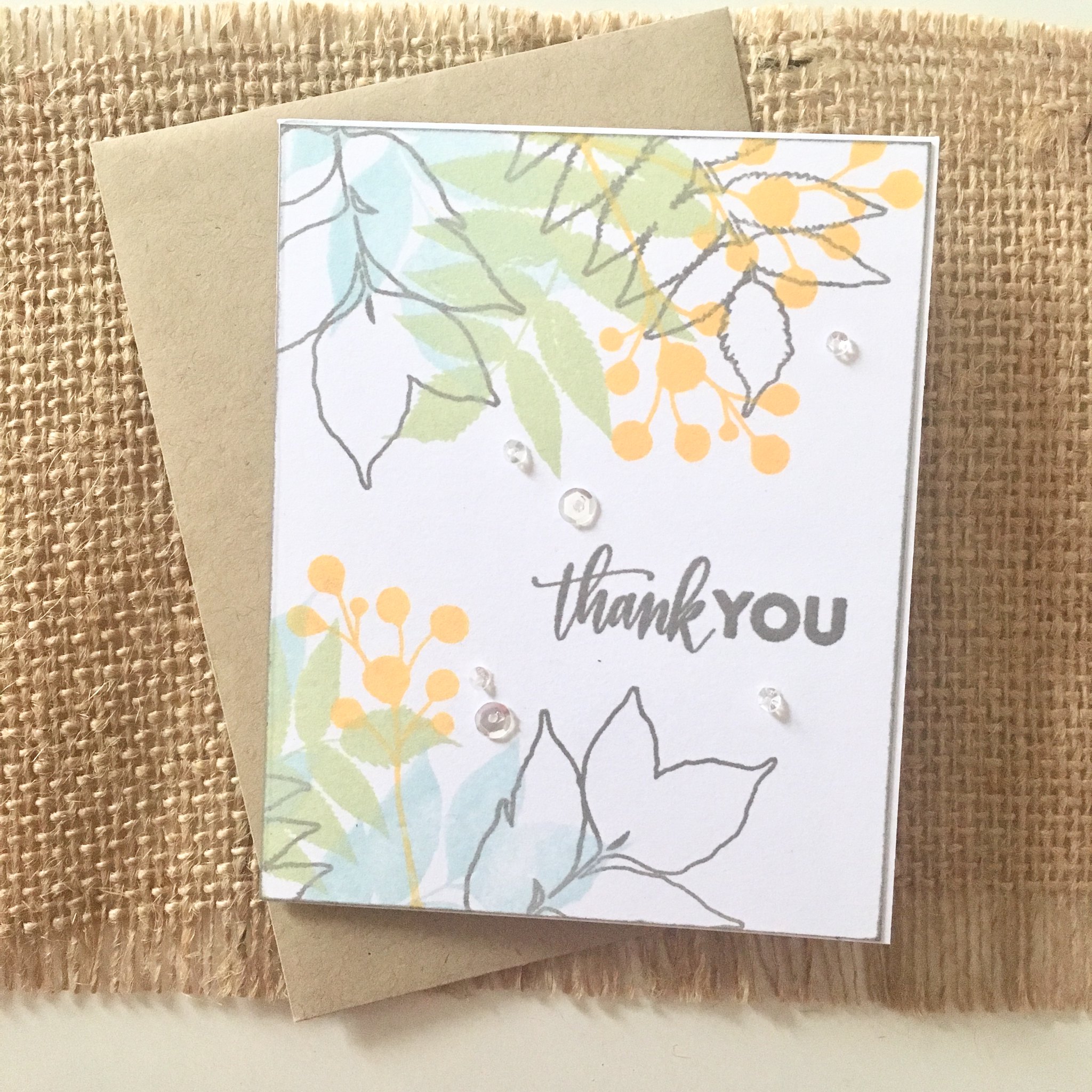 Have a great day!

Just popping in to share a quick post today of a one-layer thank you card. For this, I used a new favorite stamp set: Sohcahtoa from Altenew. I have a thing for triangles, so this set really does it for me! 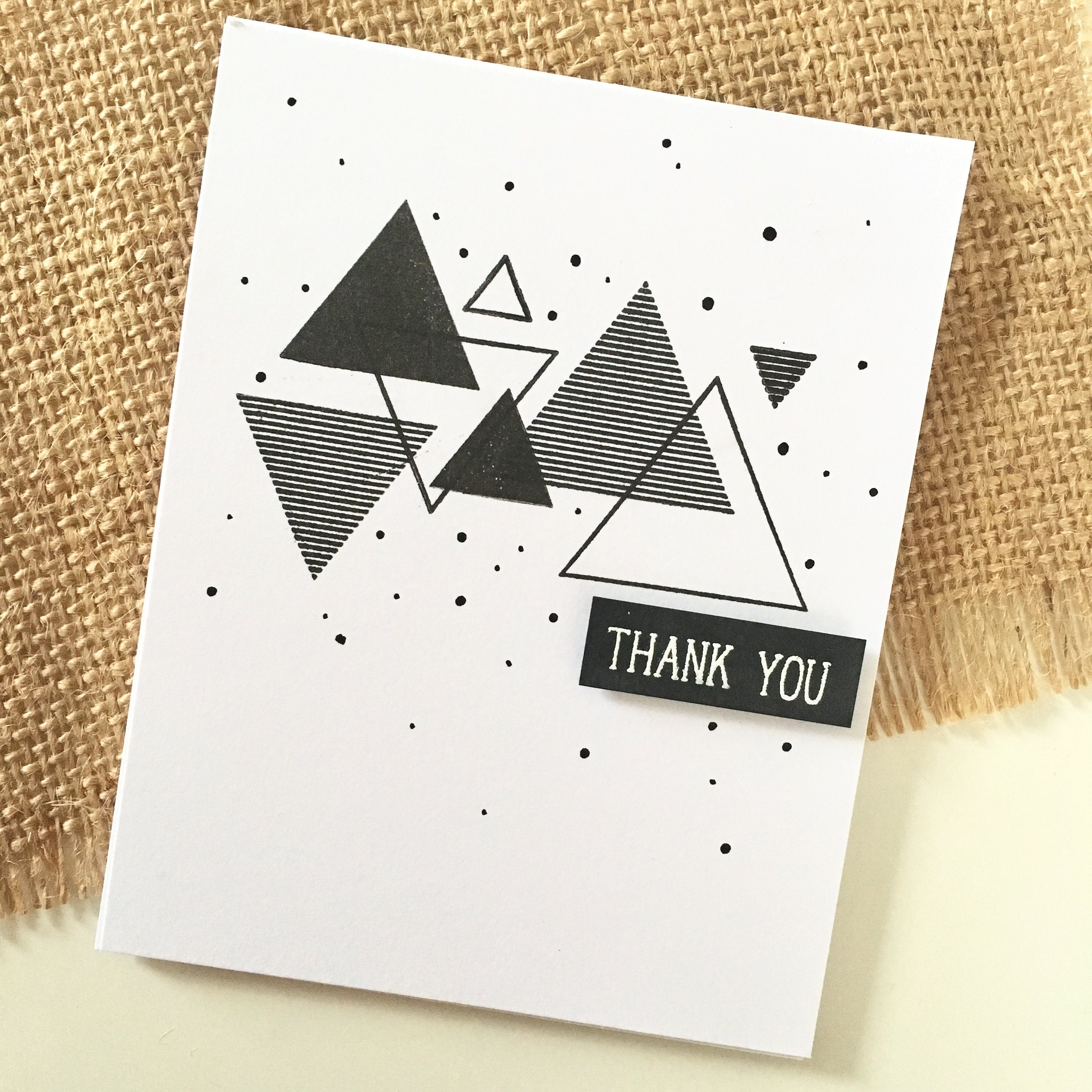 I wanted to keep the card really graphic, so I kept with a black and white theme – stamping my images with VersaFine Onyx Black ink in a random (but visually pleasing!) pattern. I then added a sentiment, embossed in white on black cardstock. 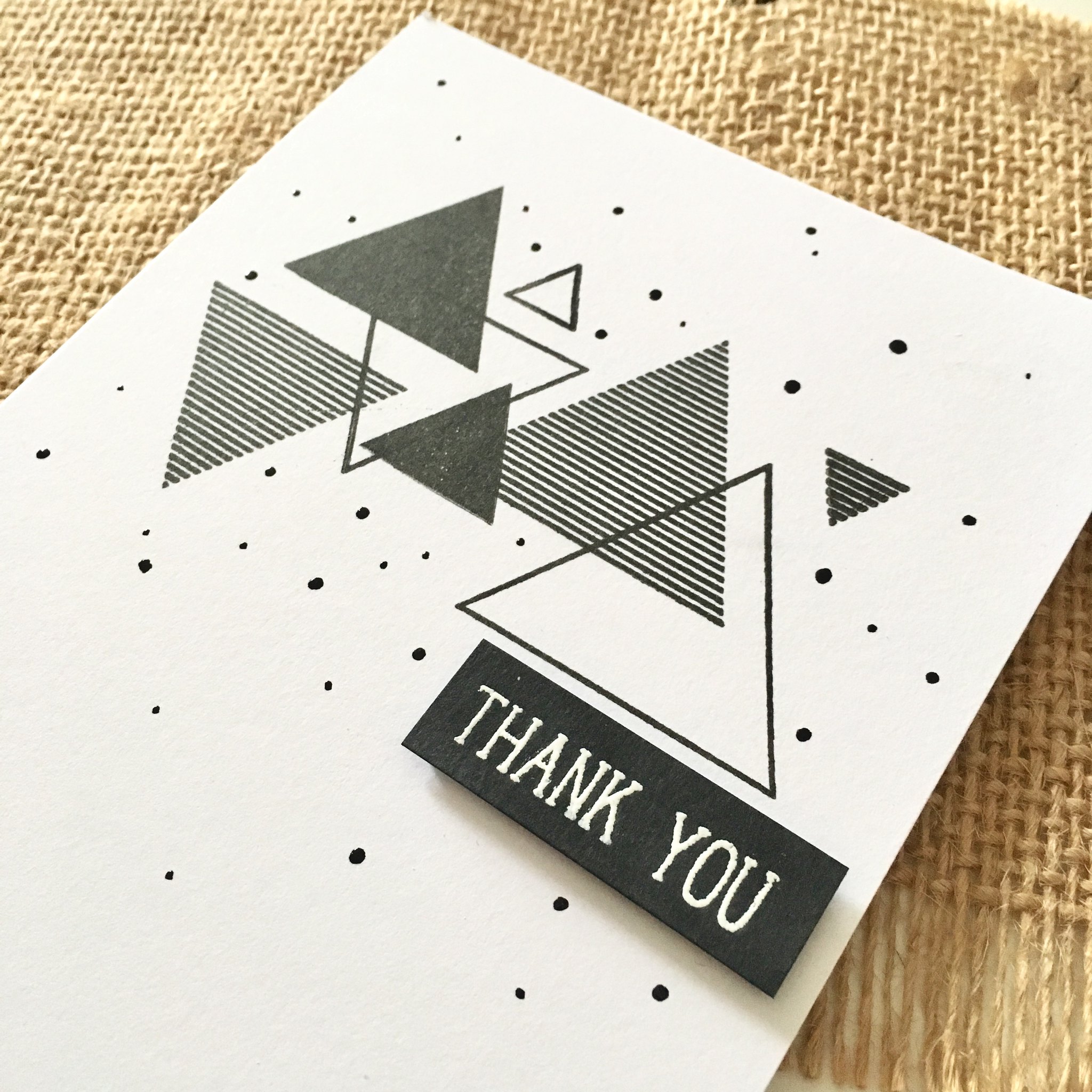 As a finishing touch, I used my Pico Embellisher in Tuxedo Black to add some dots here and there. 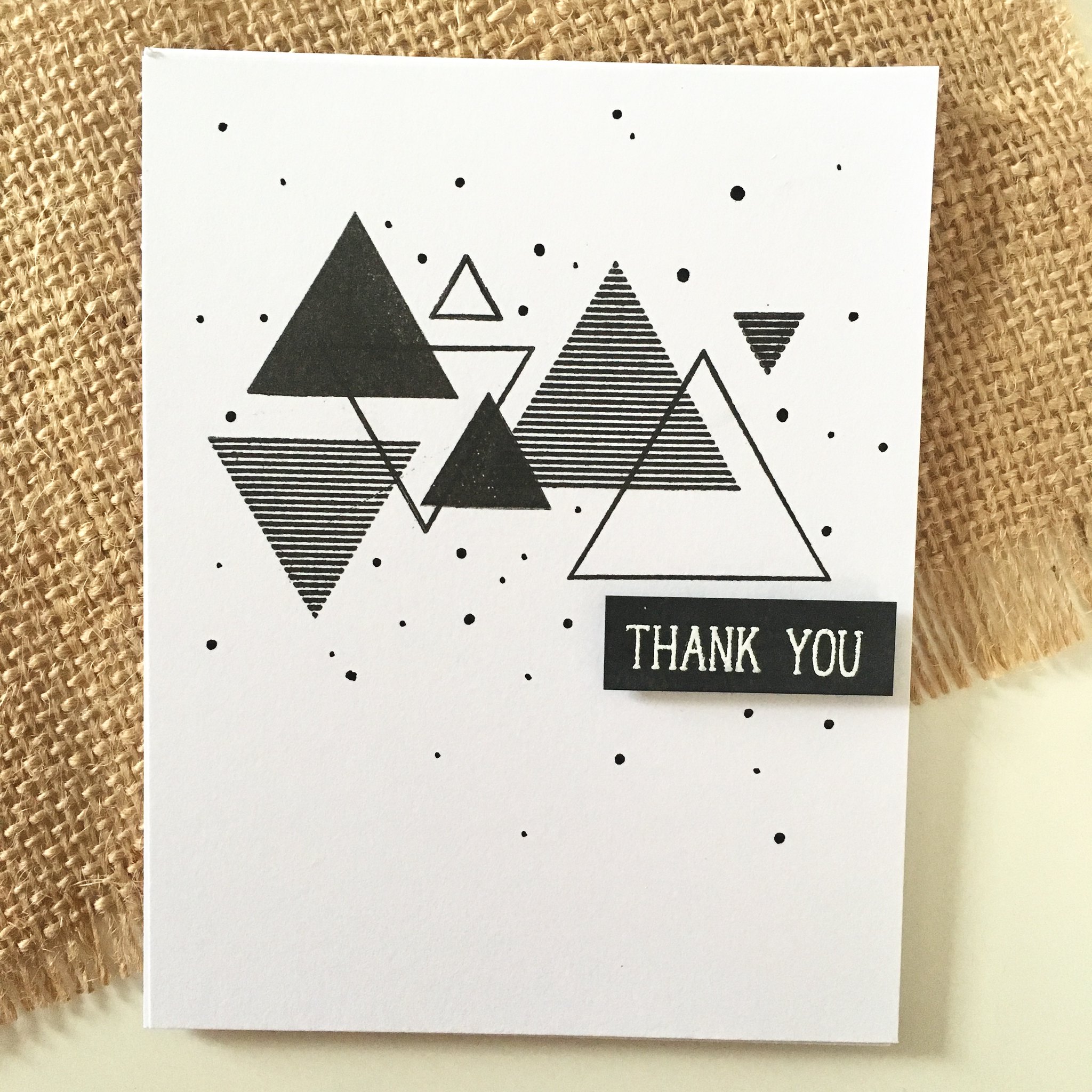 I made a few of these in other colors, but so far I like the black and white best. I’ll keep experimenting, though! 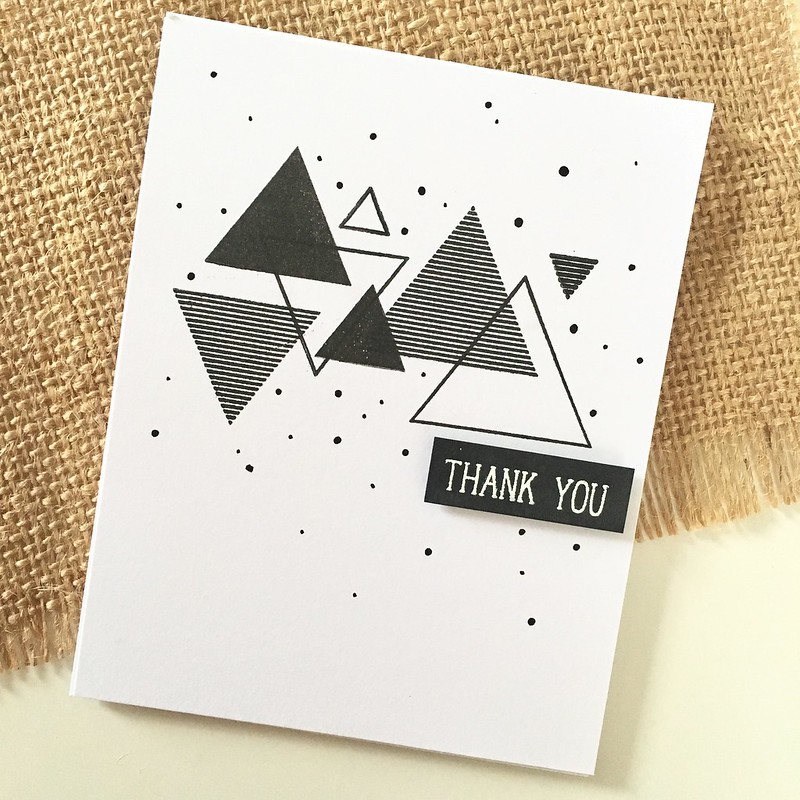 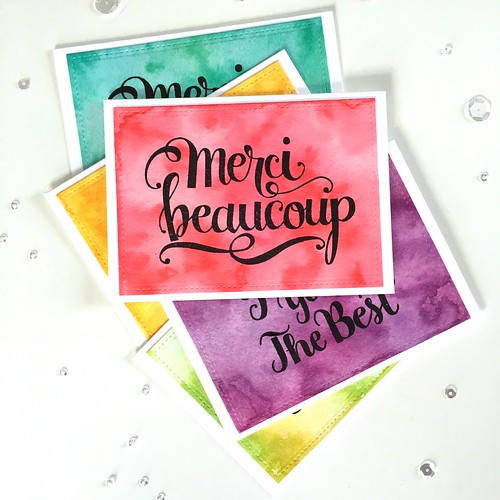 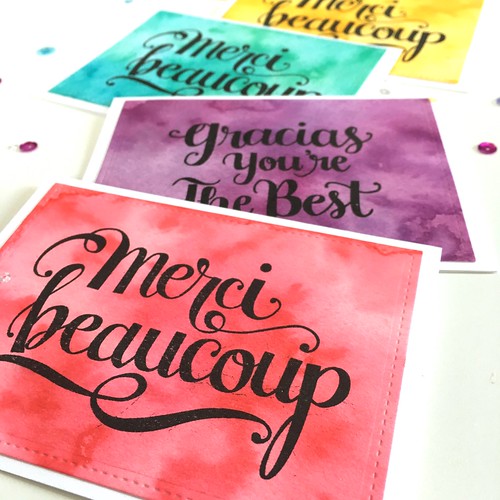 I started by painting simple watercolor washes over several 3 1/2″ x 4 7/8″ panels of watercolor paper. Once each panel was dry, I cut them down slightly smaller and then added a big bold sentiment on each using the Mama Elephant Merci stamp set. I stamped the sentiments using VersaFine Onyx black ink. Lastly, I mounted each panel onto a 4bar-sized card base. No frills, but these cards still pack a punch! 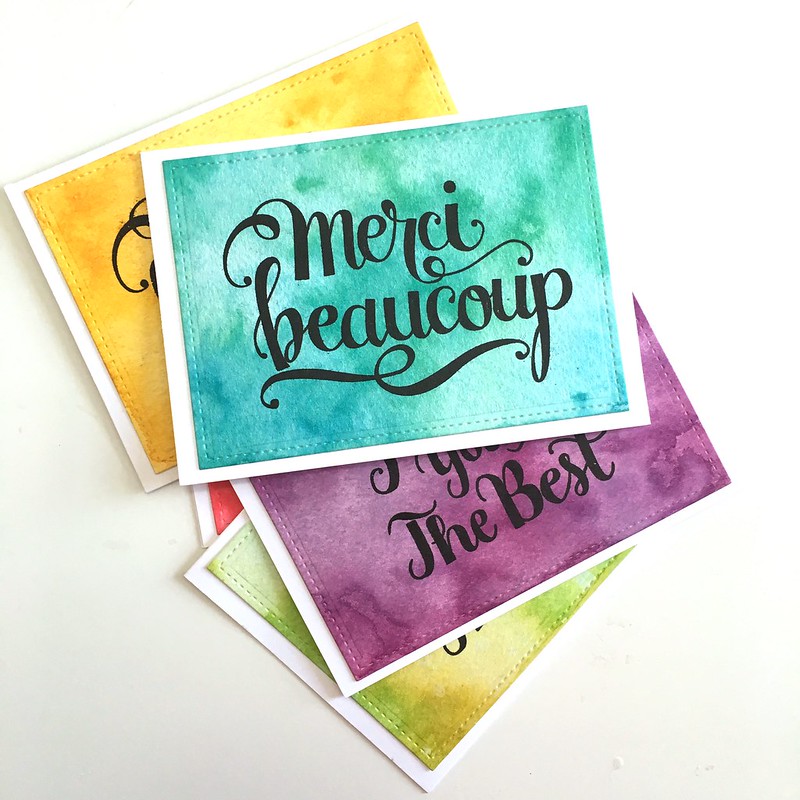 Thanks for reading! I hope everyone has a fantastic weekend (I’m hoping the snow that’s headed this way doesn’t pile up too much – fingers crossed)! 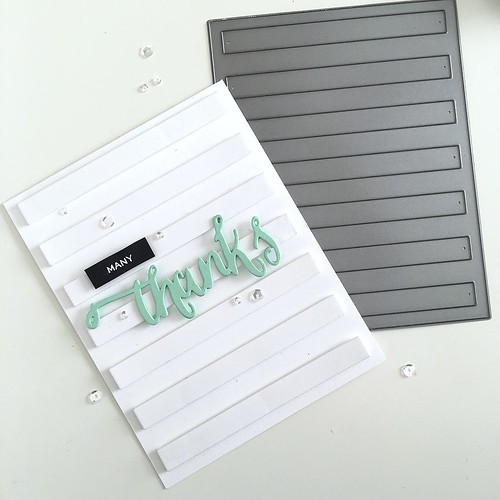 I sent off that custom order of Welcome to Brooklyn cards a few weeks ago (phew!), and made sure to include a thank you card with the order. Once again I made use of my favorite coverplate die from Papertrey Ink, along with a thanks die from Wplus9. 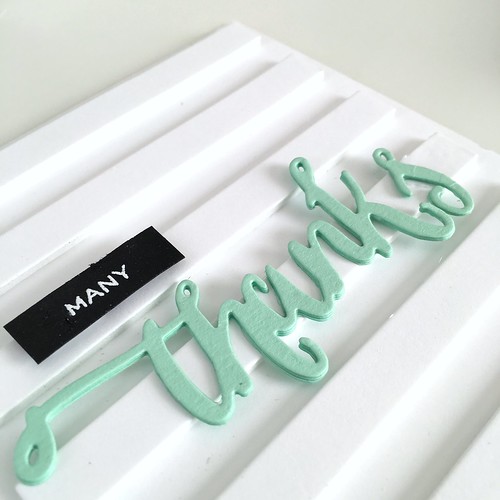 I used some fun foam behind the stripes before attaching them to my card base to give the card some dimension. I cut the “thanks” several times from some mint cardstock and stacked them on top of each other to give the sentiment some oomph. I used the hand lettered thanks stamp set for the “many” which I white heat embossed onto a small strip of black cardstock. I added a few moonshine sequins to finish it all off! 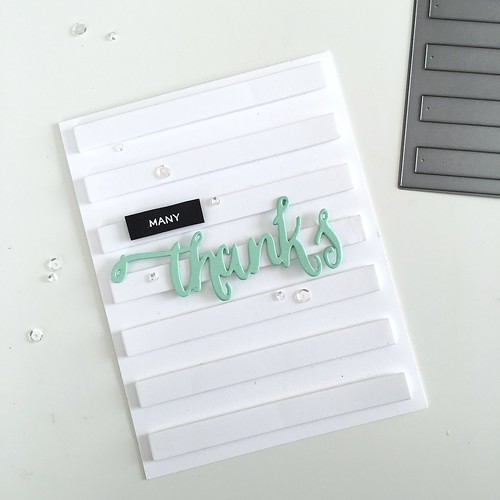 Sometimes a simple distress ink-blended background and a big and bold sentiment are all it takes to put together a nice thank you card! 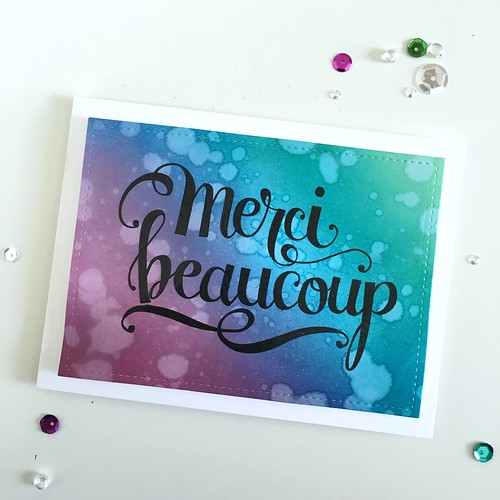 The two cards were made for two college students who worked for me (at my day job!) this summer. They were such a great help to me that I was really sad to see them go. Somehow bright, colorful handmade cards eased the pain just a bit. :) 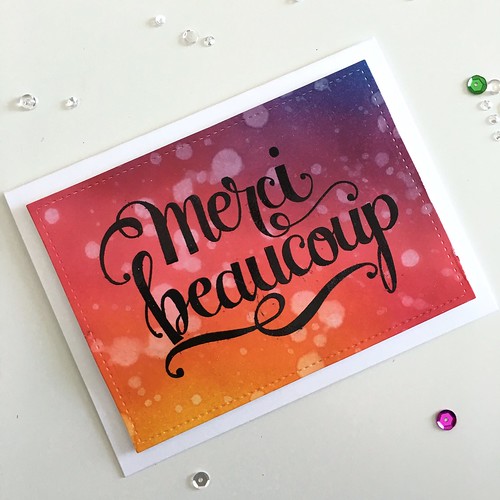 I had an ink blended panel kicking around my craft room, that I had made during  #thedailymarker30day coloring challenge. To make the panel, I blended an assortment of distress inks onto some white 80lbpaper in rough rainbow order. I then added some water droplets which bleached out certain areas and created what looks to me like a nice bokeh effect. I then used a 5″x 3.75″stitched rectangle die to cut two panels from the larger piece. 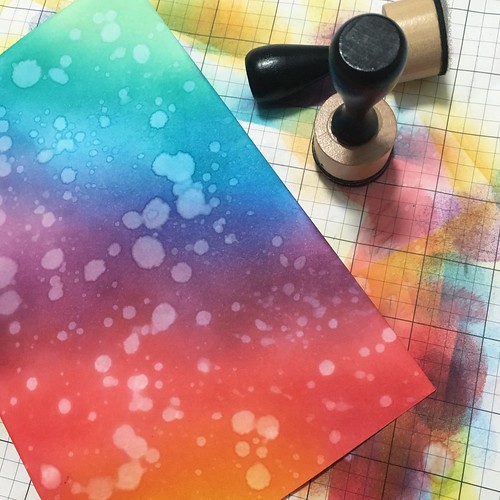 I used my Mini Misti and Versa Fine onyx black ink to stamp the sentiment from the Mama Elephant Merci stamp set. Then, I attached each panel to an A2 sized card base. I resisted the urge to glue some sequins onto the cards, though I think that might have been a nice finishing touch. 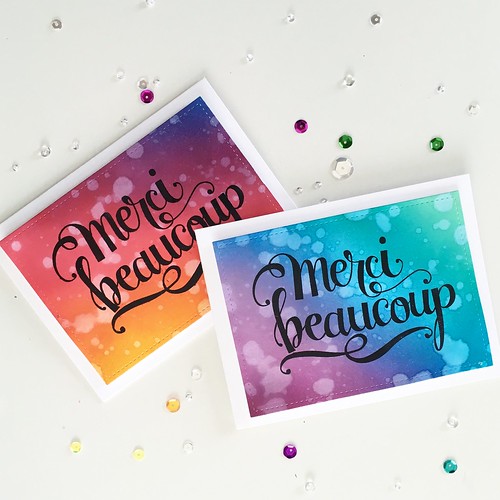 I really love how these turned out. I hope you like them, too!

Popping in today to share two more thank you cards. I made these two cuties using the Mama Elephant Charmed stamp set with coordinating dies, and my Zig Clean Color Real Brush Markers! 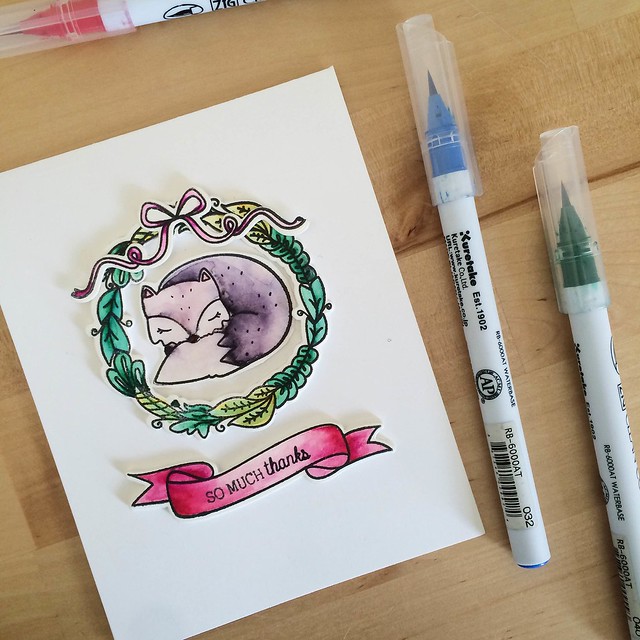 I’ve found that I like using the Zig markers with water to create a water-colored effect. I just lay down some color with the marker and use a paintbrush to pull the color around and do some shading. I only have the six color set, but it’s easy to blend colors and/or use varying amounts of water to achieve different color values. For the wreath around the fox I used a combination of blue, green and yellow in various places. 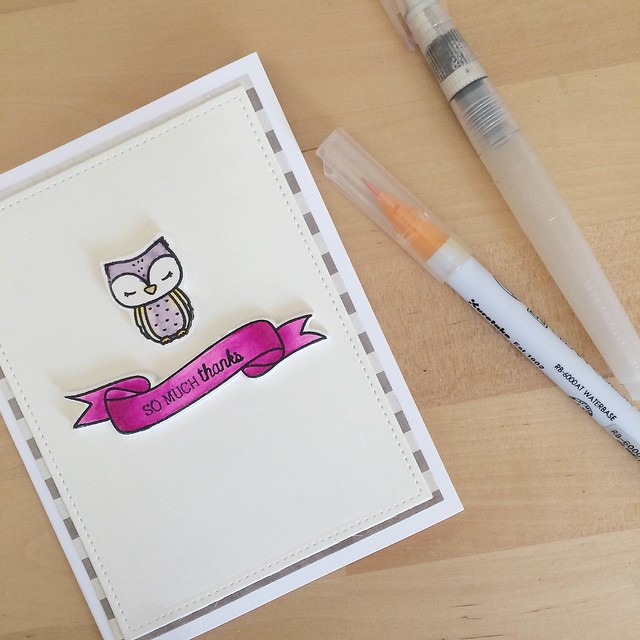 Since these cards are pretty clean and simple I used some foam tape to attach my critters and sentiments to give it some dimension. I also used my Simon Says Stamp stitched rectangle die  and some patterned paper for the panel to finish up this card. Then I did a little dance because this stamp set is just too cute!