I was recently commissioned to make a retirement card that looked just like this one I made a few years ago. This time, we went for a more Autumnal color scheme, but kept just about everything else the same.

I started with a watercolor background in a combination of orange, yellow and red tones. I then stamped out some Painted Flowers in ink colors that were about the same tone. This was a lot of trial and error and I tried a lot of ink colors until I got a combo that I liked. Phew!

The sentiment is a combination of some hand-lettering I did and the spelling out of the word Retirement (which meant this card had to be an oblong size, about 4.5″ x 8″) using Neat & Tangled Journaling Alpha dies (a favorite die set of mine!).

I like how it turned out! And it shows me that re-visiting a card style again is a really good exercise in creativity. Even though the design elements are essentially the same, I was able to tweak a few parts and practice my lettering, which is never a bad thing. I might even like this second attempt better than the first! 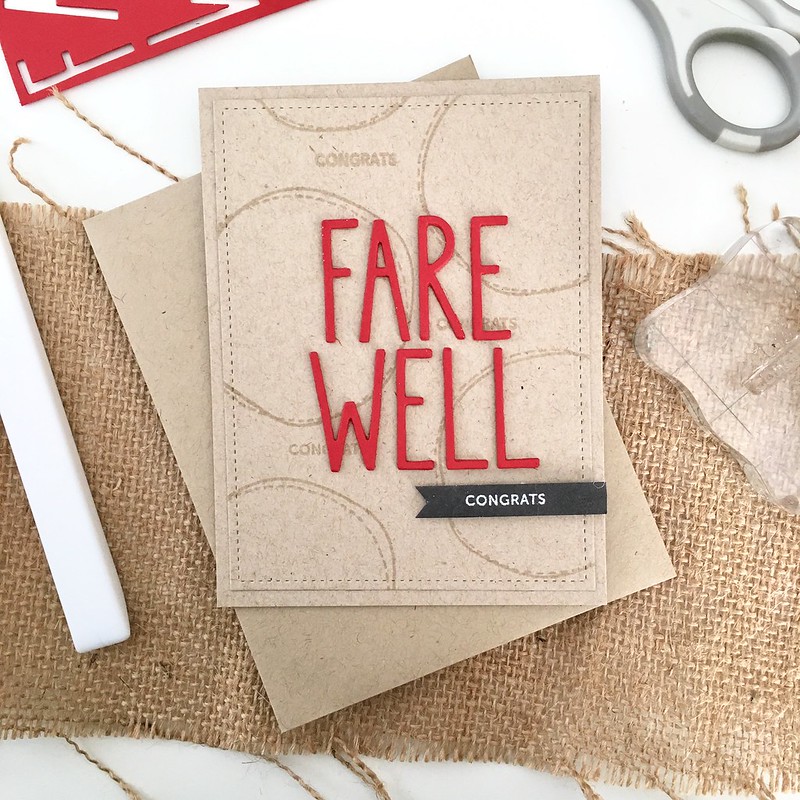 I said goodbye to a coworker last week, so a farewell card was in order. There’s something I like a lot about big red letters on a craft background (especially for masculine cards) so I went with that here.

First, for the panel, I used VersaMark ink to stamp out a few wonky circles from the Sparkle and Shine stamp set. I also stamped a few “congrats” from a Mini Messages stamp set (I cut this sentiment apart to only use one of the three congrats messages). I then cut the panel down a bit using a stitched rectangle die. 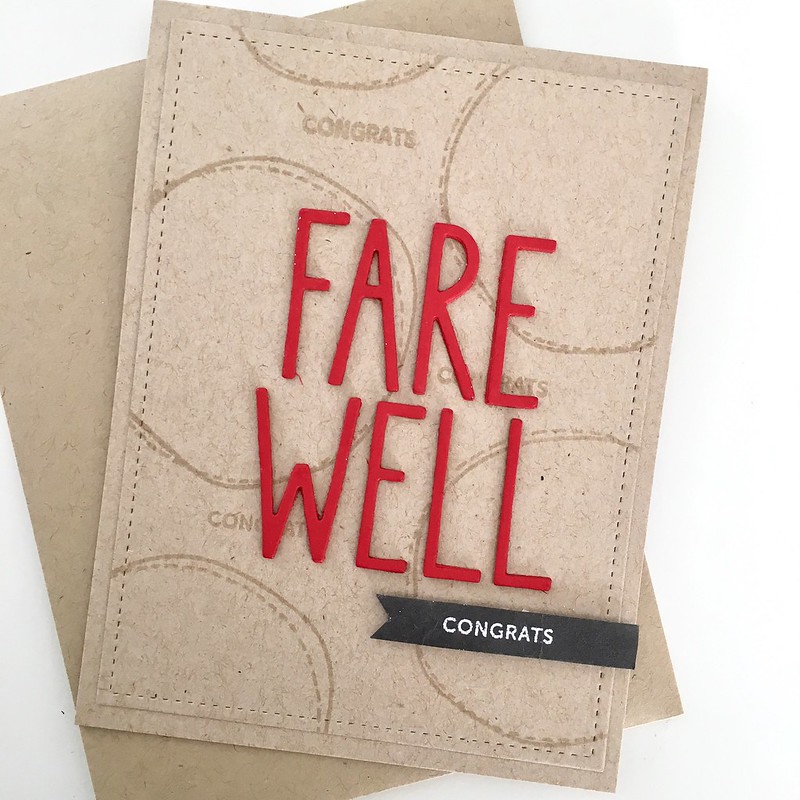 I cut FAREWELL out of red card stock several times using Jounaling Alpha dies and stacked them up several letters high to give the sentiment some dimension. The congrats was stamped with VersaMark onto black cardstock and heat embossed with some white embossing powder. I then adhered that little sentiment strip to the card with some foam tape. 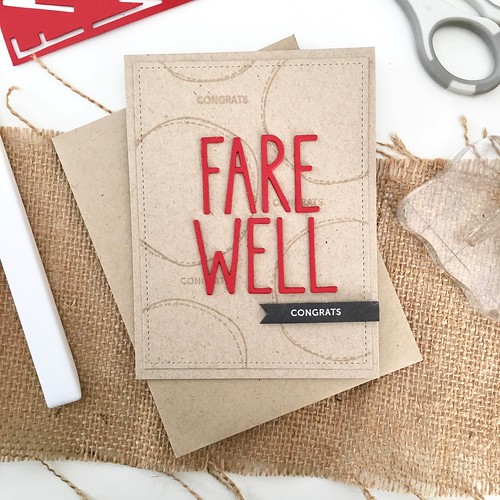 To finish the card, I adhered the panel onto an A2-sized card base cut from some more craft cardstock. No extra frills because it is a masculine card, but I’m pretty pleased with how it turned out otherwise! 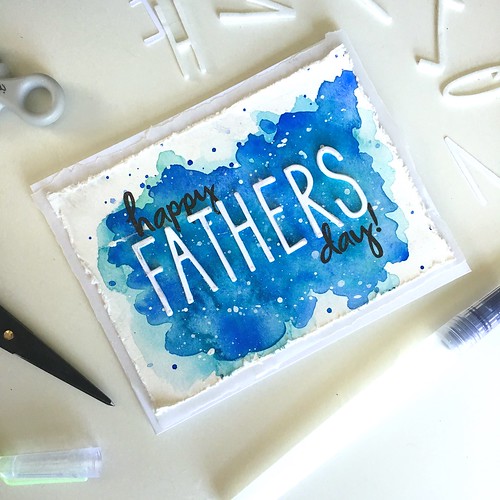 It’s almost Father’s Day, which means the weekend is approaching! This Father’s day card includes some watercolor and my favorite Journaling Alpha dies, which are great for creating sentiments when you have zero fathers day-specific stamps or dies… 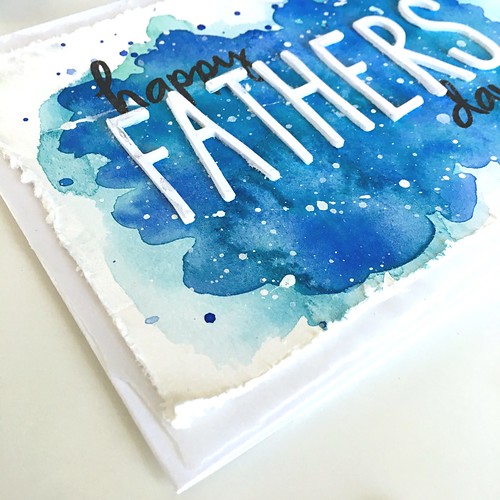 I did several watercolor washes on a Canson watercolor paper panel in various shades of blue and green. I also added some blue spatters with the watercolor and white spatters with some white acrylic paint. While that dried, I cut out the letters to spell father from some white cardstock and fun foam, and layered the cardstock on top of the foam with some multi matte adhesive, and set those aside. When the panel was dry, I figured out where I wanted the words happy and day to go. This part of the sentiment comes from the Bold Blooms stamp set, I just cut the stamp apart to separate the words. Yep. Cut it apart. Photo polymer stamps are easy to cut apart and they will fit back together nicely once mounted onto an acrylic block if you want to stamp the whole thing again, so it’s really no big deal if you want to do some stamp surgery! 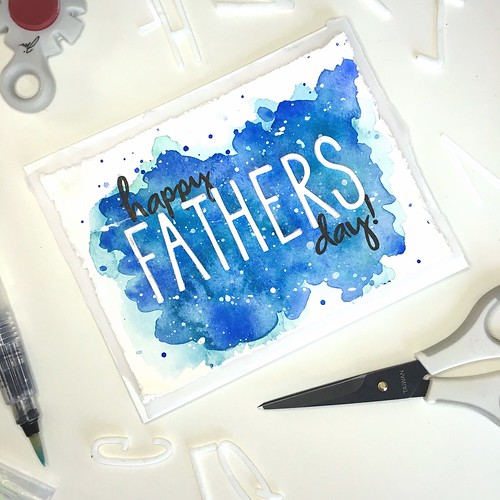 Anyway, I stamped happy and day on my panel in black ink, and then mounted my die cut letters. I felt the panel still needed something, so I distressed the edges a bit with a distresser tool and then mounted it onto  piece of vellum that I tore the edges from to make the whole thing look even more distressed. Unfortunately, the photos don’t pick up that detail. I mounted everything onto an A2-sized card base and called it finished! 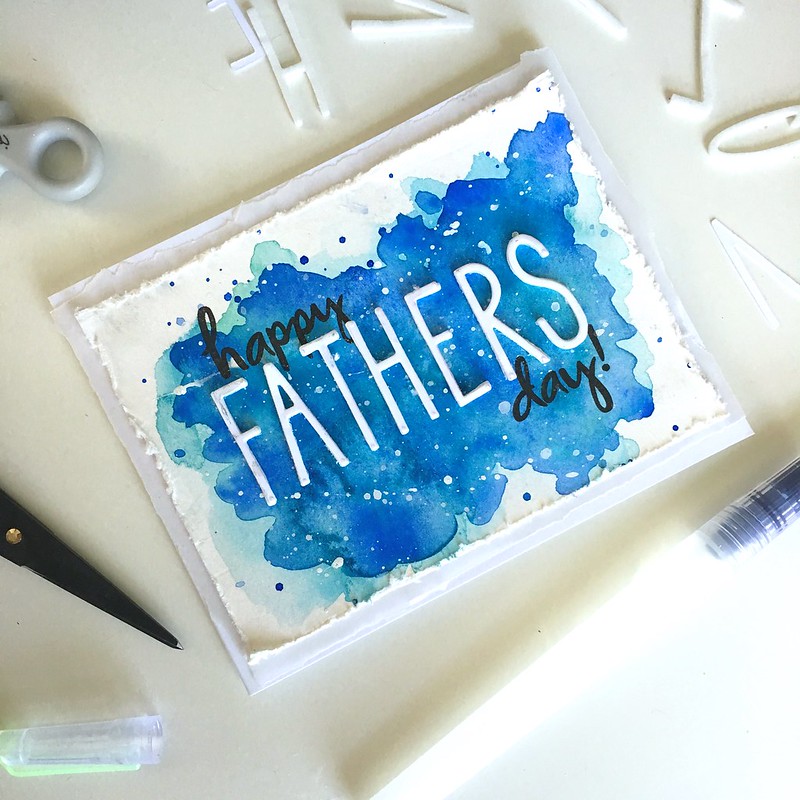 Do any of you have special plans for Father’s Day? 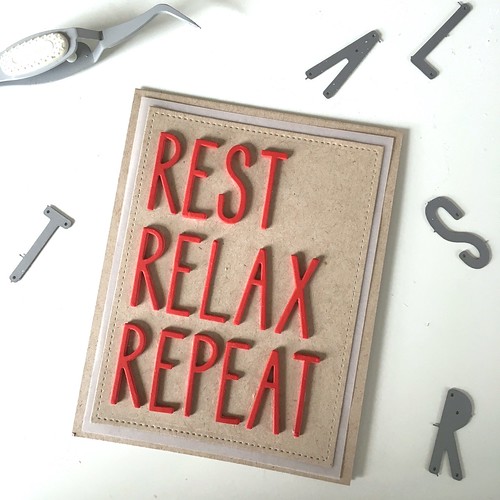 Ahhh, wouldn’t it be nice to be doing exactly what this card says right about now? I wouldn’t mind a bit of R&R (&R) today.

This is a retirement card I made at the request of my bff for one of her coworkers. I can’t say that the design is entirely mine. I saw a card much like this somewhere on the internet and it stuck in my mind. When I was asked to make a retirement card, this design popped back up in my head and of course I couldn’t find the inspiration post to save my life. The curse of internet image searches… If any of you have seen a similar card before, please let me know so I can link it and give credit where it is due! Ok. Moving on. 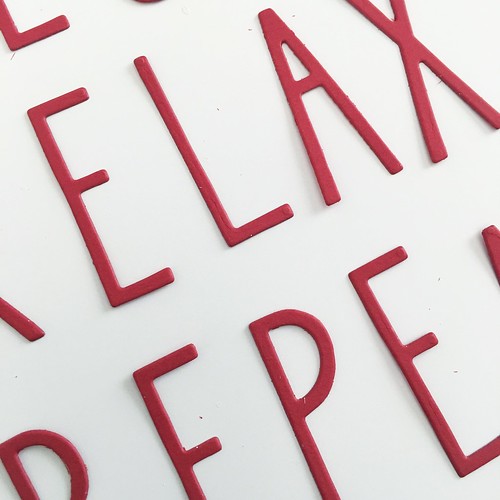 Neat and Tangled’s Jounaling Alphas are perfect for this design. I cut all of the letters I needed from some bright red card stock and also from some fun foam – I happened to have red fun foam, can you believe it?! I think I got it at Michaels. I layered the red letters on top of the fun foam to give the card a little pop of dimension. 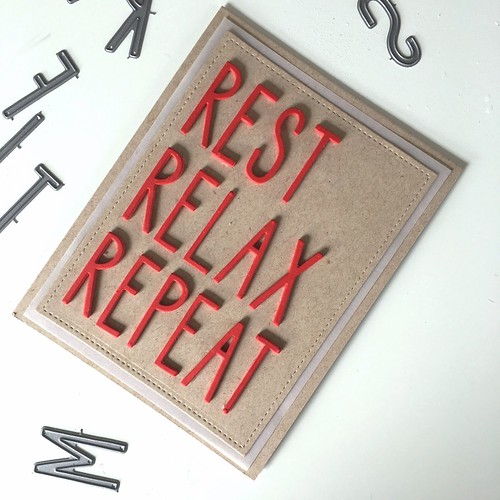 I carefully mounted all of my letters onto a panel that was slightly smaller than my A2-sized card base. I used a T-square ruler to get everything lined up just right. Both the panel and the card base are cut from Neenah Desert Storm card stock, and I decided to add a little bit of vellum behind my panel before adding it to the card base, just to break up the color a bit. 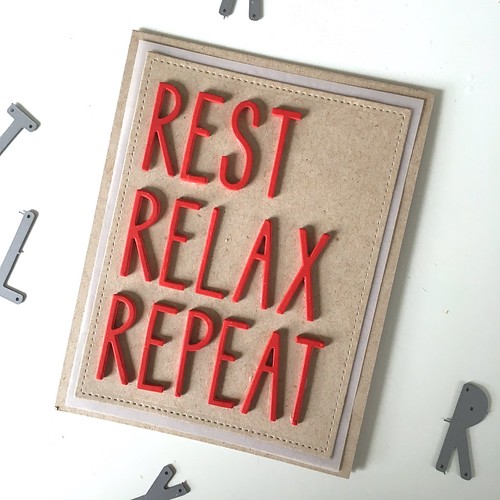 Only 30+ more years to go before I can retire!